Between December 2013 and March 2014 Contemporary Ceramics Centre is showing new makers to the gallery. 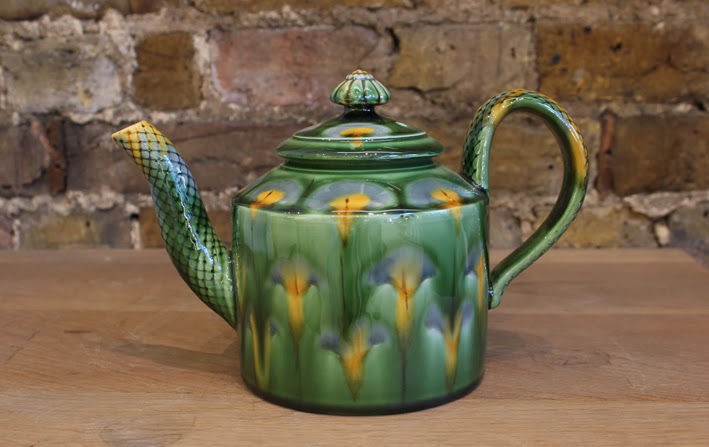 Kevin de Choisy attended Harrow School of Art during the ‘Golden Years’ of the early 1970’s.  After graduating he worked as a production thrower and designer in industry in the U.S. for many years before returning to the U.K. in 1990.  On returning to the U.K. he established himself in Somerset.  Kevin is passionately interested in early eighteenth century ceramics and his current work owes much to 18th century creamwares. 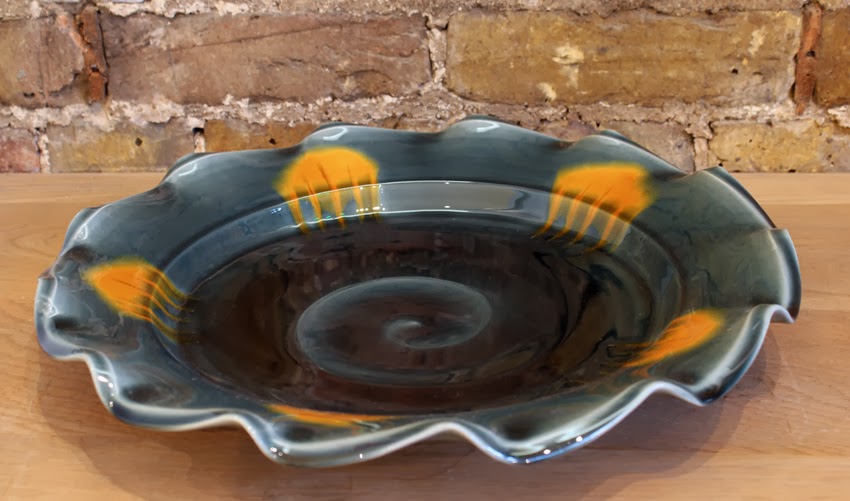 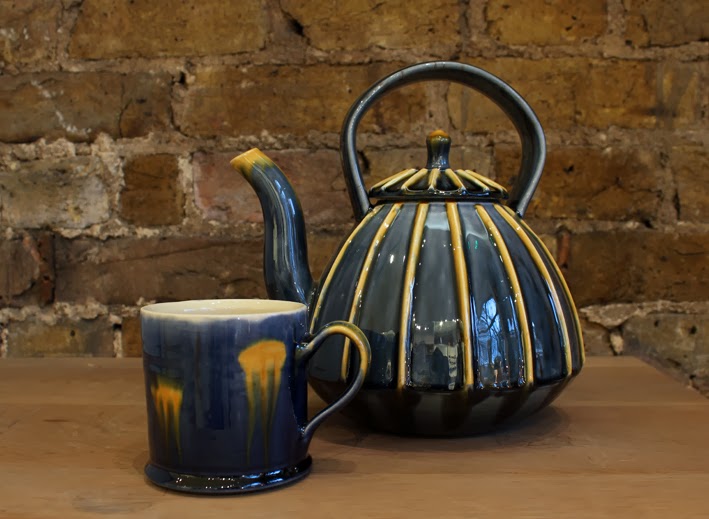 His rich glazes are achieved through a layering of glazes. Latex patches are applied over a base glaze, then a second glaze is sprayed over the surface of the pot before the patches are removed.  A third, thin glaze layer is applied which results in his high gloss finish. 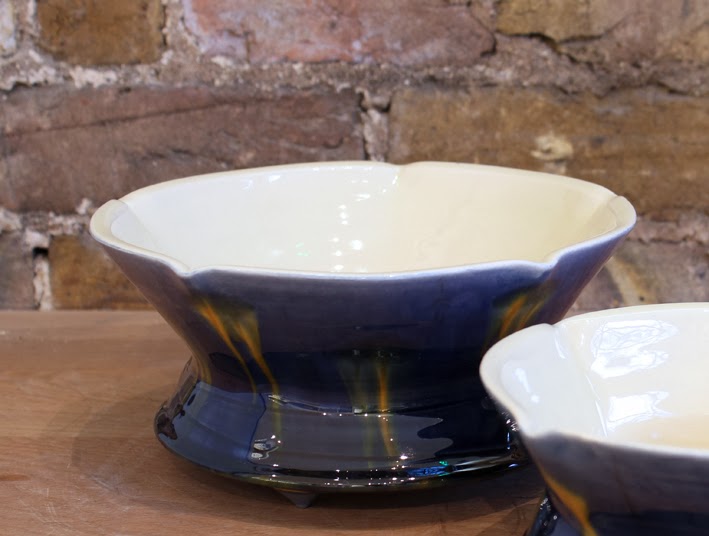 Kevin de Choisy was born in 1954. He trained at Harrow School of art under Colin Pearson and Walter Keeler. 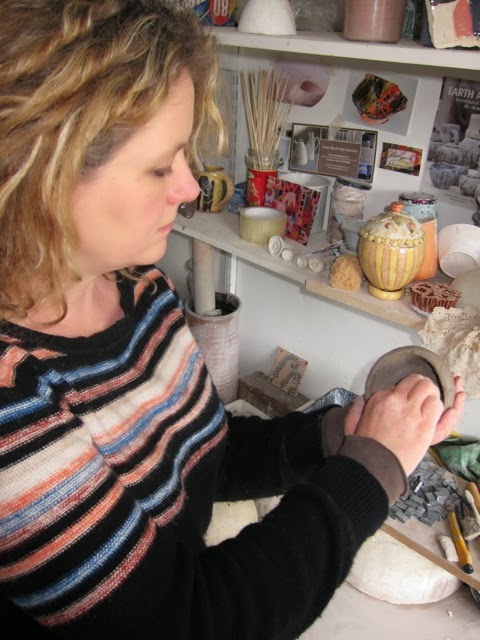 Wendy Johnson handbuilds functional and decorative pieces.  She takes a playful approach towards functionality which is mirrored through the hand drawn and illustrative quality of her decoration. 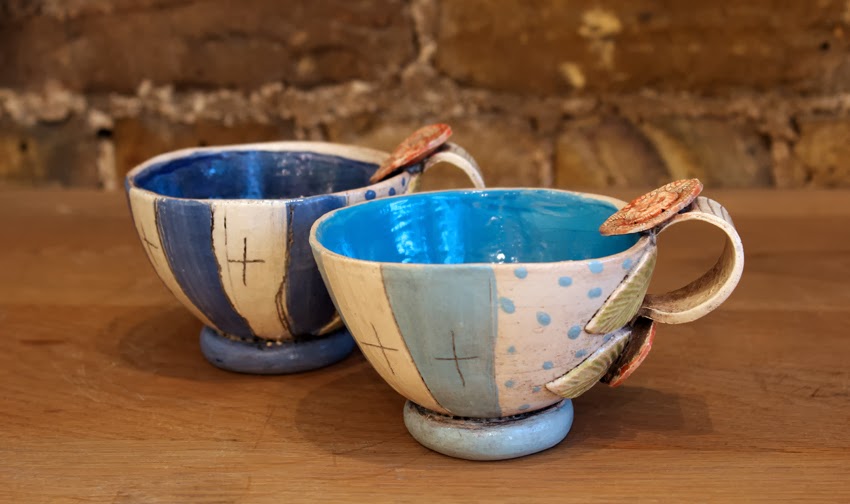 Nature is a frequent motif and can be seen taking the form of leaves and flowers, cut from sheets of delicately decorated clay. There is a fragile quality to her illustration which is contrasted with a bold use of colour as seen in vessels such as her brightly coloured and rounded cups.  Sitting on top of cushioned rings, the cups also feature applied flowers and leaves decorating the handles. 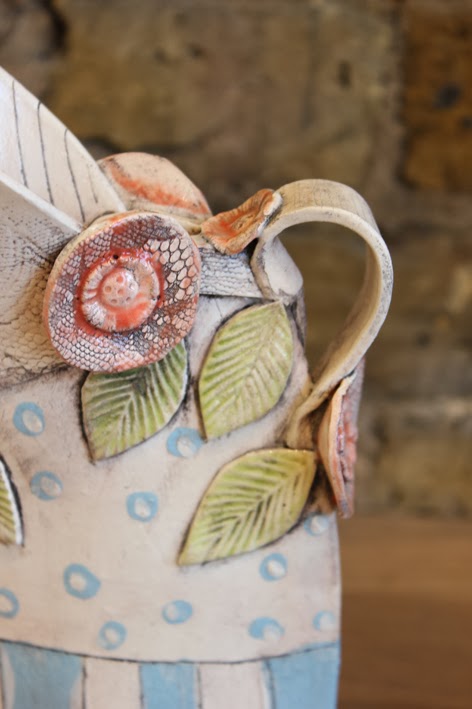 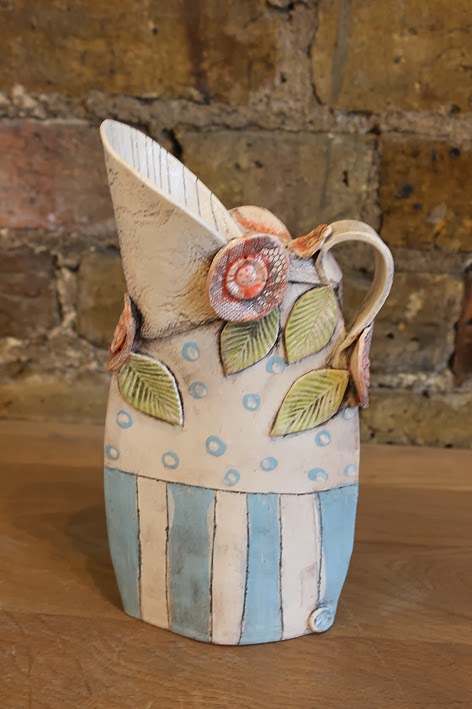 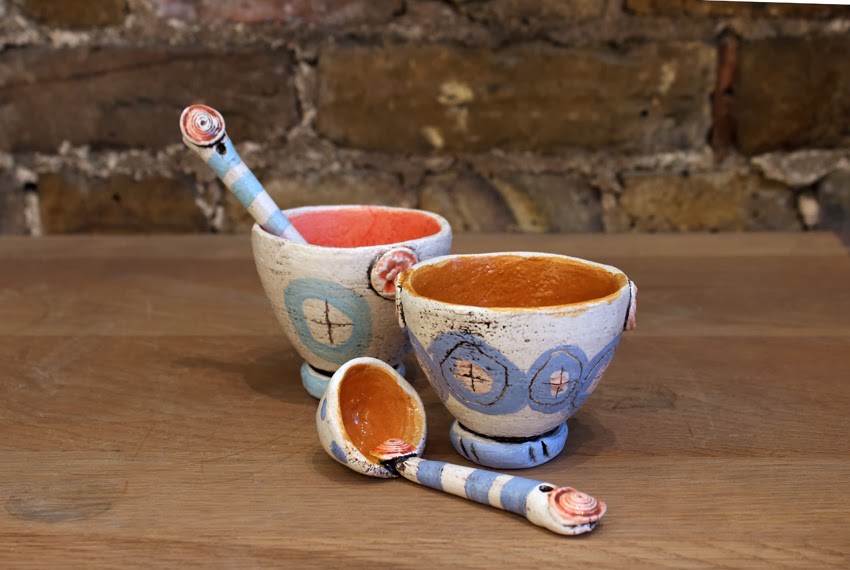 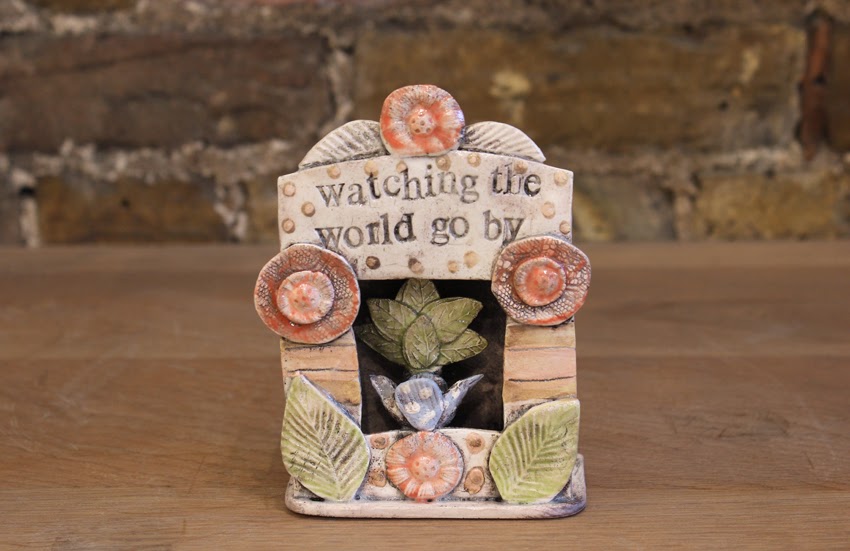 Clocks, candle sticks and story boxes are equally illustrated sometimes with text suggestive of thoughts which may have inspired the piece or notions she may be asking the viewer to consider. 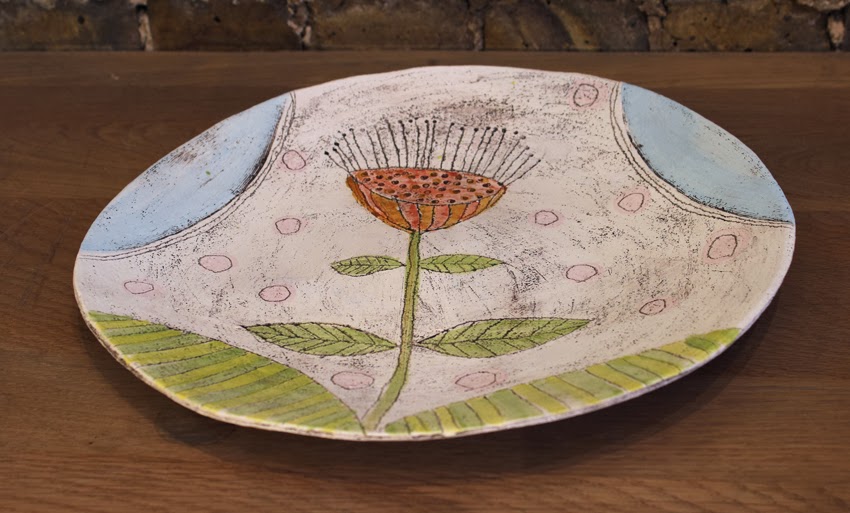 Wendy Johnson graduated from Derbyshire College of Higher Education in 1990 with an HND in Studio Crafts (Ceramics) with a Distinction.  She exhibits regularly and also works as a creative practitioner within educational settings and the community. 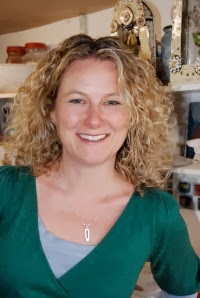 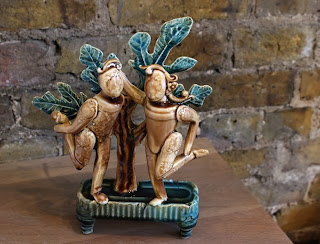 Rose Wallace recalls the tradition of Victorian mantelpiece ornaments with her current Flatback Figures series. Victorian Staffordshire flatback figures were made to depict people or mark events that were important and part of popular culture at the time.  Utilizing a similar process, Rose works from casts taken from the products and the by-products of contemporary life. She constructs pieces that can be seen as both observations and as comments on present day society. 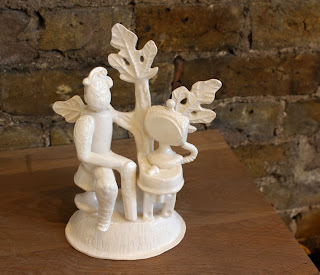 Working with a limited colour palette and fluid glazes that pool to create a sumptuous depth of colour, the movement of the glaze picks out fine details created through the casting process.  She mixes references, with what look like cast food containers acting as plinths from which cabbage leaf trees grow and embossed wallpaper people rest and stretch whilst out jogging. Cream ware figures sit on top cream ware pie tins, surfing the internet using very ornate watch-like monitors. 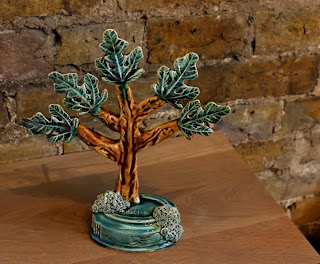 These are pieces which engage with the viewer through the tactile qualities of the making process and through subject matter, creating narratives that we can respond to through our daily lives. 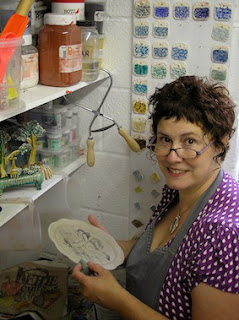 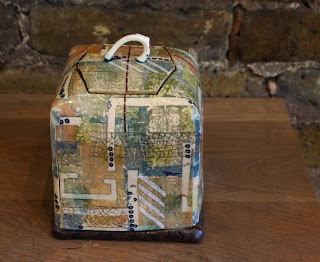 Robert Cooper has, for many years, employed recycling as a mode of working.  When re-using found objects, for example, pottery shards from the Thames foreshore, this recycling carries with it a sense of logic. Mixing remnants of the past with fresh ideas to create new objects, with histories yet to be made.  Robert then builds upon the historical layers he’s assembled, bringing further elements into the mix. Recycled clays, oxides, even glazes, materials often left over from his teaching sessions, nothing goes to waste. 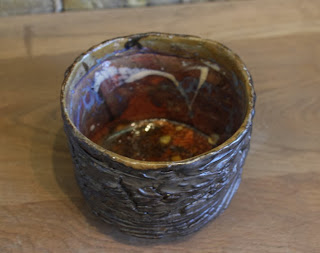 It is a considered mix and match approach.  Glazes of Jewel-like blues or forest greens run fluidly down internal surfaces catching the light against the marked, often heavily textured and burnt exterior.

Robert talks about new narratives created through the process of recycling.  His teabowls appear to hold years of stories and as the viewer we can begin to unravel them adding to the mix our own tales. 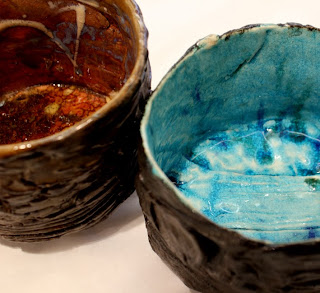 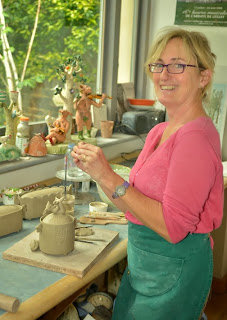 Much humour can be found within Laurance Simon’s detailed exploration of the animal kingdom and nature.  She tells stories through her use of imagery which is both painted in bold colours and shaped with clay. Playing with the notion of function, Laurance presents objects that can be used but in a way that asks us to play and wonder at the tales she is telling. 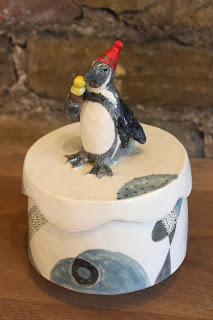 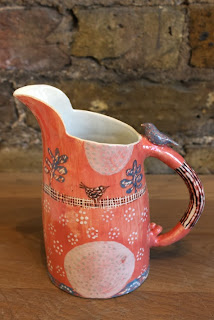 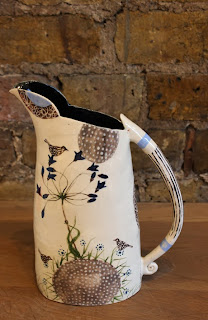 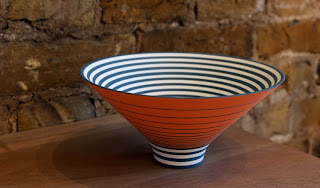 Depending on how you look at Sara Moorhouse’s conical vessels, it is possible to experience the same vessel in a number of different ways.  From the top, concentric bands of colour of varying widths pull your eyes into a dizzying almost vibrating pulse of line and colour.  Take your eye further down and view the piece from the side and what you saw as bands of circular colour become abstracted, with the outside and inside surfaces in conversation, now forming new shapes and patterns.  Rims become the centre, insides and outsides invert, insides become outsides…  They play with your senses in a very wonderful way.  Set two or three vessels together and the experience is intensified. 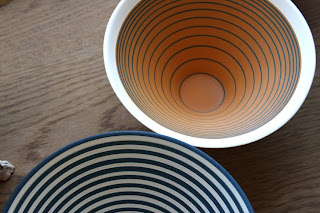 Sara’s use of colour and pattern stems from ways in which spaces within landscapes appear altered depending on the constantly changing seasons, weather and time. She used her conical forms as three dimensional canvases, distilling these colours of the landscape into bands, visually altering the size, depth and apparent shape of the form through the applied colour.  Her newer works explore the illusion of colour and movement, playing more purposefully with optical effects, playing with our senses through careful and considered arrangements of colour and line. 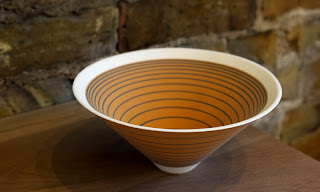 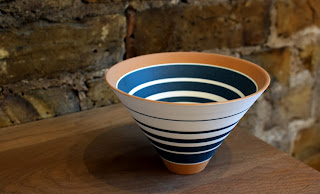 Sara Moorhouse graduated from University of Wolverhampton with a BA (Hons) in Illustration and 3D design in 1996.  She continued her studies and graduated from UWIC School of Art and Design, Cardiff with an MA Ceramics in 2004 and a PhD Ceramics 2010.  She has exhibited within the UK and internationally since 2005. 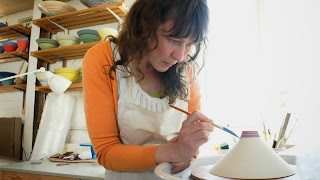