Delfina Emmanuel | Form as a canvas...

"I was particularly captivated by the gentle flowing of the living creatures found in the seabed...

As a child I grow up surrounded by the traditions and perfumes of Sardinia, a land rich in marine life, with its ancient customs that have survived the passage of time. My native culture with its music and folk-costumes of luxuriant materials adorned with precious jewels and my early education in classics, in particular the fairy tales and symbolisms found in Latin and Greek mythology have contributed to the ideas that have shaped the work I create today. I was particularly captivated by the gentle flowing of the living creatures found in the seabed: the protruding coral structure tentacles, the huge variety of the porous sponges, how they take different shapes and the porosity and patterns of their surface. 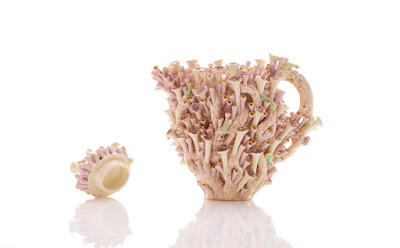 In 1974 I came to England and over the years I have made London my home and had a family.

I was a later starter in the world of ceramics. My first encounter with clay, a medium I found immediately inviting , alluring and seductive was at Harrow College under the enthusiastic and professional teaching of John Higgins who, beyond basic techniques, taught me also how to express my individuality.

During my time at College I vividly remember the first college trip to Aberystwyth Arts Centre in Mid-Wales, where I had the opportunity to see the work of acclaimed international artists like Jim Robinson, Billy Adams, Simon Carrol, Walter Keeler to mention but a few, demonstrating the endless possibilities of manipulating clay and the magic of firing.

In 2004 I decided to study for a degree at the University of Westminster in London, this time under the wing of invaluable tutors and I graduated there in 2007.

In my second year at Westminster I focused more in hand building and I become more interested in oval shaped forms. A research of the Italian Renaissance of the 15th an 16th century and in particular the ornamental sculpture of the Florentine 'Della Robbia family has influenced me most. 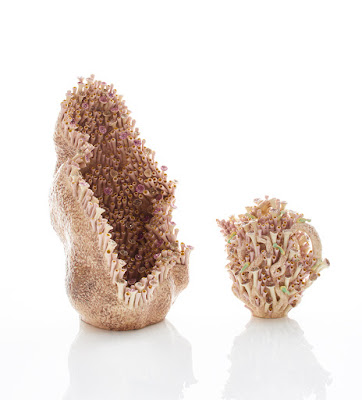 My pieces are mostly about surface decoration and the form, although very important, has become the canvas in which to set up the ideas.

I have tried high fire glazes with good results except they were very subtle and I want the colours to be brighter and a low fired lead glaze has given me a better result. I paint my wares with oxides and stains and finished with gold lustre to achieve what I wanted."