The festive season has taken hold and the shelves are laden with beautiful ceramics, with prices and sizes to suit many different budgets...

Our last exhibition 'Robin Welch | 65 Years In The Making was very well received.  For the first time we exhibited paintings alongside ceramics. It worked well, and who knows, maybe this is something we will explore further...

Christmas
This year we have a Christmas gallery takeover... expanding our range of very giftable ceramics across the complete gallery space.  You can see makers who are new to the gallery on our display rotation, alongside many new pieces from our regulars.  Our displays change very quickly at this time of year, and we always recommend more than one visit! 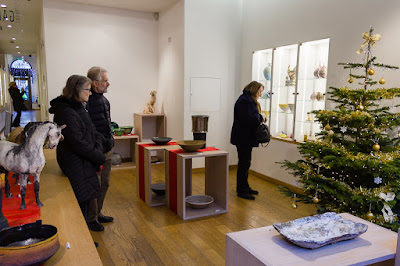 Regular Makers On Display
As a new addition to our blog, we will be featuring some of the makers whose work is regulary on display in the gallery.  Sasha Wardell was planning on a career as a bilingual secretary when an inspirational teacher suggested she consider an art school training.  Her slip-cast and carved vessels come from her fascination with the 'problem solving' aspect of mould making and working with Bone China.

Featured Artists
During early November we introduced Rob Bibby, Barbara Lock and Catrin Mostyn Jones into the gallery.  All three makers have been members of the Craft Potters for a number of years and it is exciting to show their work for the first time in the gallery.


To find out more about these new artists, we ask each new maker to tell us something about themselves and how they began working with clay. First to be featured is Catrin Mostyn Jones.

Over the years, as we've added to this blog, it has built into an informative archive of artist's stories.  Once you've read our current entries, please dive into the back catalogue and discover the many different histories and approaches to working with clay.

Whilst studying for my A levels in Art, French and German, I was planning on becoming a bilingual secretary until an inspirational art teacher came along and suggested I consider an art school training – and so left a career in languages behind.

I followed a formal art training including a Foundation course in Cambridge in 1975, a BA at Bath Academy of Art, Corsham (where I had originally applied to do graphics but transferred pretty swiftly into the ceramics dept!) and subsequently an MA at Staffordshire University, Stoke on Trent. Working in a couple of factories during an Erasmus exchange scheme to Limoges, France and at Royal Doulton, I then realised I had a complete fascination for the ‘problem solving’ aspect of ceramics i.e. working out how moulds functioned and the idiosyncracies of Bone China as a ceramic material. I graduated in 1981, set up my studio in 1982 and have been working for myself ever since.
Although I look at the natural world for patterns and decoration, I consider my work to be process-led. I have always been fascinated by the methods used in the ceramic industry, as well as bone china itself, and so try to exploit the material’s inherent qualities of whiteness and translucency within my work.

I now spend my time working between the UK and France where I run mould making and bone china courses during the summer months, as well as continuing my own practice.


Barbara Lock
The sculptural forms made by Barbara Lock take inspiration from her surrounding environment. Barbara is based in Cardiff, and the surrounding landscape offers rich material; walks along coastal paths, changes in landscape through the seasons, weathered stones and layers of peeling paint.

Natural forms are important and her observations have led to her current focus; the shape, movement and aggression of birds.

Small round bodied objects taper with closed necks suggest birds with beaks pointing skywards.  Colours are softe and muted, layered and eroded to reveal previous layers.  The soft sheen of a waxed finish invites the viewer towards the surface.  Larger objects bring to mind sitting birds, heads turned to look back or preening tails.

Barbara uses a coiling process - adding coils of smooth clay to small thumb pots. Slices of white clay are stained with various oxides and stains, often worked into the clay before it is painted with layers of oxides and coloured slips.

A repeated burnishing compresses the surface, creating a smooth finish.  Pieces are left to dry slowly before a very slow firing which is followed by waxing to give a soft polished surface.

Barbara studied Ceramics at Bournemouth and Poole College of Art and later also qualified as a teacher. She has been variously employed: making domestic ware; Art Therapist in Social Education Centre and hospital; managing pottery training workshop for young adults with learning disabilities. Her studio is on n Cardiff and she has been represented by a number of galleries in Wales, England and France. 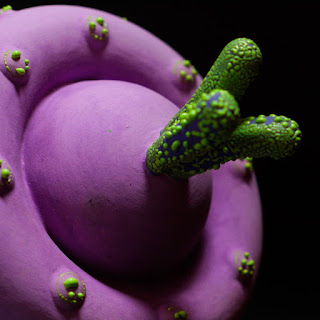 “I was first introduced to clay on my foundation course at Coleg Menai.  Following this I studied at Manchester and loved the qualities of clay and how I could create complex shapes. I am currently based in Chester.

I have produced many collections and often make pieces in small batches or special editions. This has included a lighting series, jewellery and individual or one-off pieces.

Alongside these I have been commissioned for works in public spaces, such as; Manchester City Art Gallery, Liverpool Royal Hospital, and Stepping Hill Hospital in Stockport


Over the years I have exhibited at a number of prestigious craft shows nationally and internationally, with shows taking me as far as Chicago.
My Practice


Sculptural works are inspired by exploring creatures of the sea and images of the human body at a microscopic level. Examining the complex colourful images derived from these studies has given me the stimulus to develop and explore differing combinations of form and colour.

My vivid collection of hand built and press moulded sculptural forms are brought to life by the additions of growths using coils and textures. Work is predominantly non-functional although sometimes functional with a twist. The collection ranges from large extravagant one off artifacts to medium and small decorative, tactile pieces, including a jewellery and lighting range. What really brings the work alive are the exciting surfaces which include flocking and glazing. A wide range of earthenware glazes are applied by spraying multiple layers sometimes using a wax resist." 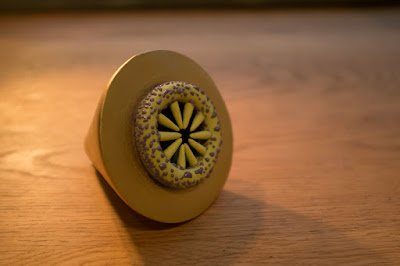 The resulting effect has been described as "Dazzlingly beautiful, like a neon hallucination of a coral reef"