Exhibition dedicated to the memory of Colin Pearson

John Pollex talks about his work:

'Since helping to revive an interest in traditional slipware in the early seventies, I felt the need to bring colour to the surface of my work. The result of this is that I have been increasingly influenced by the paintings of several abstract artists. It is not a long list but a relevant one, if one is to understand how the surface marks on my pots have evolved.

The first is Sir Howard Hodgkin, whose work I saw in the summer of 1985 at the Whitechapel Gallery. Sir Howard was showing 40 paintings from 1973 – 84. One painting in particular impressed me. It was a large round work almost four foot across entitled ‘Valentine’. As soon as I saw it, I thought how wonderful something like that would look on a large plate. I was already using coloured slips at the time, producing a range of repetition pots. I was becoming dissatisfied with repeating patterns and wanted to make each pot different and more individual. So, seeing the Hodgkin Exhibition spurred me on to look at other artists and to give up repeating designs on my work.

What followed were the influences of British artists Patrick Heron and Ben Nicholson, as well as American painters Hans Hofmann, Mark Rothko and Robert Natkin. Hofmann was a very influential art teacher and developed a method he calls his ‘push pull’ effect. By placing certain colours next to one another, the illusion of shapes receding and coming forward is produced and I often incorporate this effect in my work. Ben Nicholson’s line drawings of pots have influenced the use of ‘pot’ shapes on my work. Diane Nevitt is an artist here in Plymouth, whose use of colour and form I’ve also found to be very inspiring.

During the last year I’ve started to hand build teabowls, mugs and bottle shapes. I really enjoy the break from throwing and the way the various shapes come together. Although I’m not as meticulous as some hand builders, I like the freedom that comes with the way I put the shapes together. Shoji Hamada’s well known remark that the best pots are ‘born and not made’ has always been one of my favourite quotes. Hodgkin also makes a similar comment when he says ‘the painting must tell you what it wants’.

All the colours are added with sponges, brushes and plastic spatulas, and some scgraffito work is often included to emphasize a shape or mark. I never have an idea of how the finished image will appear on the pot, as the whole process is an improvisation. I begin by covering the pot in a black slip and then introduce the background colours, before allowing various shapes to appear. These could be improvised pot shapes or just blocks of colour. Depending on what type of pot I’m painting, the process of building up the final image can be quite time-consuming. I often need to take short breaks to give my eyes a rest and reflect on how the colours and shapes are working together. This slow and methodical way of working means that I don’t have great output of pots these days. A typical week’s work might be six teapots or five large jugs!

If there is a message in what I do now, it is simply the enjoyment of working in the present moment.' 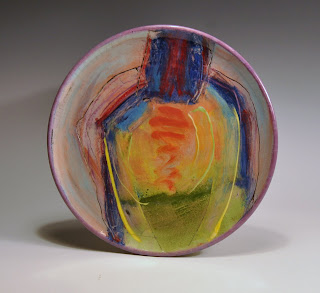 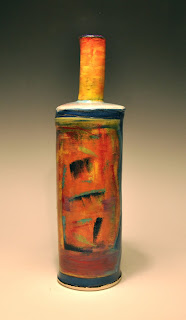 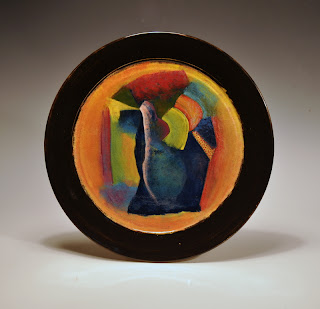 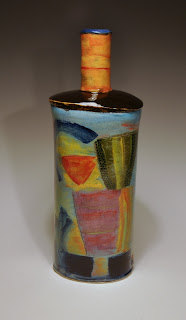 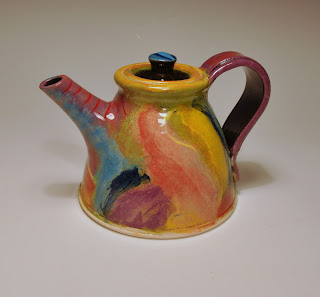