"I remember becoming aware of the creative effects of fire when a neighbours wooden garage containing an ancient ash framed van caught fire. When extinguished there stood a fascinating labyrinth of standing charcoal. When I first started working with clay at college it was the transformation of materials during firing that held me in thrall - it still does."

Neil MacDonell writes about how the transformation of materials continues to enthral him; a process that is at the heart of working with clay as materials alters from one state to the next... raw materials to working clay, wet to dry, dry to fired... It can be argued that this transformation continues even when works are fully fired, as they move and respond to environmental changes.

Transformation is also found within his subject matter, seen in the decaying industrial landscapes. In this weeks post, Neil talks about the themes within his ceramic practise and his journey with clay.

Finding a stark beauty in decaying industrial landscapes I am drawn to places of solitude and desolation. As nature reclaims these places I imagine the past lives and passions crystallised as crumbling wood and rusting steel.

The textures that appear in my work are derived from the fragments of detritus that I have found in such places and the forms are vehicles for these
patterns.

Over the 45 years or so that I have been working with clay I have built up a collection of hundreds of ‘bits’, mostly made of wood, steel or plastic but now existing in the form of flat clay moulds. Many are little larger than postcards but there are also plaster moulds of larger objects such as the surface of a car radiator and decomposing cardboard box. A particular favourite is a piece of architectural moulding made of zinc picked out of a dumpster on Broadway, NY. There is also a can with a battered surface devastated by time spent rolling with the tide along the shingle of the south coast. 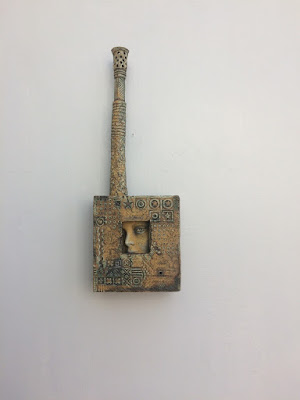 Much of my work is wall hanging, assembled using small slabs of clay patterned by pressing onto a selection of my moulds. Work in the round is built in a similar way using the patterned face as a base and building upwards and outwards with more small slabs. The small flask, tube and other industrial forms that appear in some pieces are also hand-built but sometimes modelled to appear mass-produced. The making process can be rather slow but each piece is unique and my production obviously limited in quantity.

Some recent work features underglaze colours, reflecting the tones of residual paint found on some of the source material. Most pieces, however, are washed with suspensions of copper, iron or cobalt oxide before dipping in a dry ivory glaze and firing to 1280’.

Following a successful degree show, I had profit enough to buy my first kiln and continued making. Full-time secondary school teaching remained a
vocation. As my career progressed promotion served to increase my workload but I continued to produce and exhibit my own ceramics. 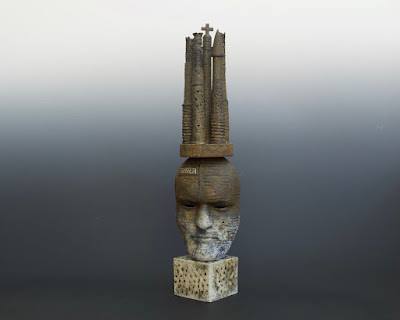 In 1990 I took leave of absence and drove 10,00 miles around USA visiting artists, galleries and teaching centres. Following my return to school, I was awarded a British Council Fellowship to teach in America but decided that I would rather return there as a professional maker. Thus in 1992, after 22 years of teaching, 17 of them specialising in ceramics, I left the profession and sold my house and moved from Lincoln to Bath to join Sally. Home became the garden basement of a shared house with a studio next door. Being able to focus full time on my own work was a great joy and more than compensated for the reduced financial security. Working contacts enabled us to travel to America and Australia and it was an invitation to show at a
market in France that introduced us to European ceramics and artists. We had also discovered ‘Potfest’; the northern ceramics market founded and run by visionary potters Geoff and Chris Cox. Meeting Dutch potters at this event led to invitations to attend markets in the Netherlands and Germany. 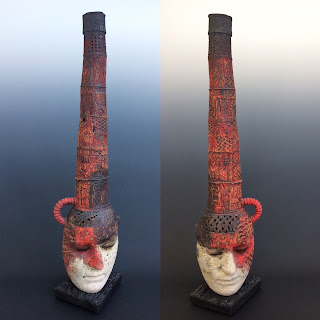