The busy spring has continued into a busy summer. Our current exhibition is the annual international exhibition which is sponsered by the Hargreaves and Ball Trust. This year we are very excited to be showing Paola Paronetto, an Italian maker whose porcelain and paper clay works present an abstraction of nature in both monochromatic and brightly coloured assemblages. The show continues into early August and will be succeeded by an exhibition of new work from Rachel Wood, Paul Wearing and Martin Pearce.

The gallery is full with a vast array of work, with more to be added in July's rotation. The shelves are  host to current work from Jan Byrne, Fenella Elms, Jenny Morten, Jenny Southam and Hiro Takahashi. In addition to this, new work from other makers arrives as Marta returns from the various fairs over the summer, most recently having just unpacked a box of Patia Davis' porcelain bottles, mugs and plates which came to us from the International Ceramics Festival held at Aberystwyth.

As always the summer months promise much in the way of ceramics based festivities. Art in Clay, Hatfield being one among many, opening in a few weeks time, and then towards the end of summer early autumn sees the return of the British Ceramics Biennial in Stoke on Trent. This also coincides with the inaugural year of Clay College, Stoke, seeing a much needed and welcome return to a skills based ceramics education in the UK.

As is now customary with these blog posts, the aforementioned makers new in on this rotation will share some of their views behind their approaches to clay as a material and the ideas and influences that have got them to this point. 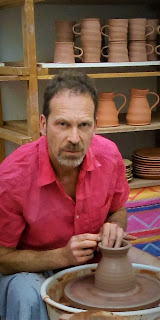 Andy’s current work on show at Great Russel street is a continuation of his latest endeavours celebrating the relationship between food and ceramics. The making of pots, tableware especially, and of food is something that Andy sees as being closely intertwined, often running workshops that incorporate both activities. Below, Andy describes his formative years and the stages that have lead to his current work, along with some rough ideas of what the future may hold for his tableware and beyond.
My experience with clay, forming it from a squidgy amorphous blob into something recognisable, goes back a long way. On reflection I realise how, as a child, I was so curious about materials; making, manipulating and creating things with my hands. I always refer to my childhood as ‘freerange’, growing up in the hilly countryside of North Staffordshire amongst pits and pots ….making clay bombs (WW2 replicas!) to flick from the ends of willow sticks at ‘the enemy’.

I went on to study Ceramics at school which I now realise was pivotal in pushing me in this direction. Immediately after school and into Art College foundation, aged 17, interested in printing and painting, I was eventually pulled back in the direction of clay…....it’s the tangible, tactile thing.

I was totally swept along with the whole notion of seeking autonomy, making my own choices and the appeal of an alternative lifestyle….the ‘bombs’ had now been replaced by the wearing of CND badges.

After hopping on my self-built bike and cycling 10 miles I was a late arrival at the great last firing of the Gladstone Pottery Kiln in Longton, Stoke-on-Trent…..this, amongst many formative experiences etched in my memory from around Stoke.

Then on to Art College in Derby (subsequently part of Derby University where I later taught pottery alongside Josie Walter - a potter with a great natural gift for slipware blended with efficiency and professionalism!). I found myself drawn to current potters making artistic expressive works, and looking back at British and French Art Pottery of the late 19th and early 20th Century. This set a template for inspiration which I was to follow for many years and I particularly enjoyed my own highly technical version of Raku.

Fast forward up to 2015 preceded by a period indecisiveness and pondering, wondering if clay still held the same appeal for me, there was a coincidence of events. I decided to go back to the fundamentals; making useable tableware pots, and was then contacted by The Exeter Arms in Derby to supply tableware (after being recommended by Mark Smith...cheers Mark!). Around the same time I had an exhibition at Artsmith Gallery in Derby and ran a Pop-up restaurant evening showcasing my own tableware.

This set me on my current track of bringing pots and food together, when and wherever possible, in meaningful and purposeful ways. Growing my own veg, creating food, making pottery, running workshops etc….all things that I love doing, but being totally focussed in the studio (usually throwing) is when I most strongly feel, in my element.


However the food has an important role to play, not least of all as a compliment and inspiration for the tableware pots that I make, additionally it also brings an approach to making that transfers across from food to pottery, and vice versa.

After many years of honing my skills I now feel like I'm reverting back to those childhood impulses - minus the bombs! - embarking on a period of ‘unlearning’ to some extent. I’m constantly looking towards making as swiftly and directly as possible combining the natural energy and looseness of the handmade with a high level of technical integrity that means the pots are robust and durable. 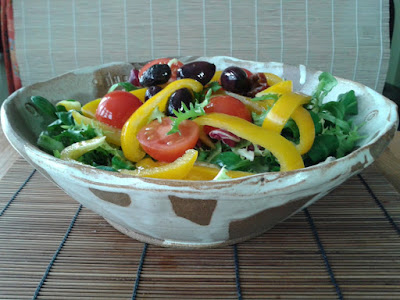 My vision is to open out and extend the range of tableware but then also use the domestic and food reference points to explore a painterly expressive approach - particularly plates. Also a further natural evolution - larger pieces..sculptural in a sense…..not sure…..don’t want to define it.

Better leave it at that for now.

'As a graduate from the Central School I could not wait to set up my own studio.'

'At a School Open Day where my paintings and artwork were displayed throughout the school, the Headmaster told my father that I should go to Art school. My father replied that he supposed it would be something to do until I got married!

I did go to art school and I did get married and I have never been unemployed - unlike my brothers who followed my father into an engineering career.

I was also lucky to have gone to York Art School in the late sixties when the Foundation Course was a rigorous 2 yr. course. Students would spend 3 days a week in Fine Art for the 1st year followed by 2 days a week in other departments. I experienced lost wax modelling and bronze casting, silk screen printing, photography, etching, lithography and mono printing as well as ceramics.

After tea served by the caretaker at 4pm. (from a corridor window opening into his office), we would have 2hrs of lectures /classes including History of Art, History of Music, Calligraphy, Perspective, and Life Drawing. Another short break was followed by evening classes where we would join the adult learners who were there purely for pleasure.

I then spent 3 yrs at the Central School of Art and Design in Holborn, London on a wonderful course covering all aspects of ceramics taught by an amazing group of staff led by Gilbert Harding Green including Gordon Baldwin, Dan Arbeid, John Colbeck, Ken Clarke, Bonnie Van de Wettering and our fantastic technician Jerome Abbo. This was also full time, 5 days a week with students expected to return in the evenings until 8pm.

During the first year, the weekly timetable consisted of one day hand building, one day throwing, one day chemistry, one day decorative techniques and one day design studies/liberal studies with an opportunity to work in other departments throughout the college.

Following the Diploma in Art & Design (later to become a BA) some of my group went on to do an art teaching diploma and others went on to study for an MA at the RCA.

As a graduate from the Central School I could not wait to set up my own studio. However, without private means I needed to earn the money to do so and started teaching evening classes at South Kensington Institute after spending the daytime hours throwing mugs for a Croydon pottery studio where after six months I really learned to throw. My brief was a hundred mugs a day and on my first day producing a total of 23 – I had a lot to learn!

'As a child I really enjoyed creating something new out of very little, and to this day nothing has changed' 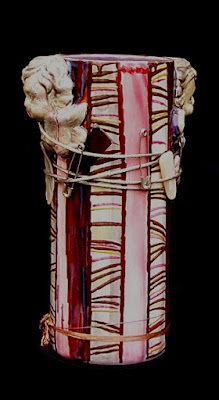 From her initial experiences at school Jan Byrne continued to study Ceramics at Bath Academy in Corsham, Wiltshire graduating in 1978, continuing on to do a one year Art Teachers Certificate post graduate course at Goldsmiths University.

Jan speaks of her relationship to teaching and making.

Teaching was always meant to enable me to pay the rent whilst making my own ceramics, but best laid plans of Mice and Men ……. I have recently retired as The Art College Director from The Corsham School, which was a specialist school in the Visual Arts for students, aged 11-18, following 37 years of teaching.

I have continued to make my own ceramics and fine art throughout this entire period, as I have been lucky enough to have had a studio wherever I have lived. I have regularly been able to sell and exhibit work through craft shops, markets, online from my website and through art galleries. I initially continued to make similar items to the ones shown in my degree show – mainly thrown or slipcast domestic china. As my circumstances changed however and my work had to fit around teaching and family life, I started to make more individual, more complex one off coiled and slab built pieces, which were highly decorated and more fine art in nature. 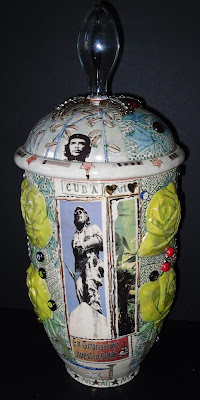 Since retiring from teaching I have been producing a wider range of pieces using many techniques. I am really enjoying the freedom that this extra time gives me.