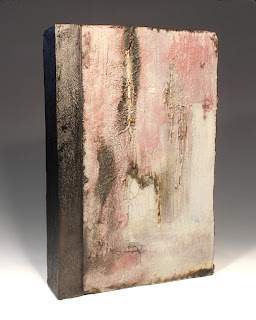 The Blast Series of works.

‘In the summer of 2010 I revisited a particular stretch of coastline,    locally referred to as ‘The Blast’ near my home town,  Seaham.  I hadn’t been there for nearly forty years.  It had been the dumping ground for the local coal mine until the mines were closed in the eighties.  When I was very small I had walked along the coast with my father, on ‘pay day’  to collect his earnings from the wages office at the mine.  We’d stop and he would point in the direction of the horizon and explain that was where he worked; three miles out and deep below the .  It was a concept I could never come to terms with.  As a teenager I would occasionally visit ‘The Blast’ with friends.  This was a place so desolate and grim it attracted various film producers and the iconic movie ‘Get Carter’ starring Michael Caine concludes with the bad guy meeting his fate here and finally being dropped out to sea from a coal conveyor.  Later, the opening scene from ‘Aliens 3’ was also shot here;  a bleak testimony to the qualities of The Blast landscape.

Forty years on since my previous visit, nature has made an amazing   attempt to reclaim what is hers and the ravages of industry have been softened to a degree where a strange lunar kind of landscape  now prevails.  The sea has removed nearly all of the detritus and   continues to eat away the coal/sand    aggregate leaving an exposed shelf, revealing varying strata of industrial waste.  At the foot of the limestone cliffs an iron inclusion weeps red-brown stains into a large marooned rock pool known as ‘’. Sun baked mud dries cracked and crazed with    visceral ooze seeping between the gaps. There is an overload of visual metaphor and yet  a strange stark beauty has won over.’ 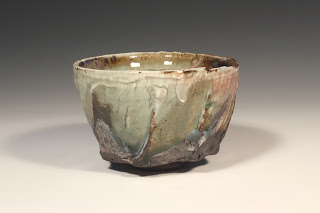 ‘About 12 years ago I visited the Hagi area of Japan where I was invited to the home and studio of  Miwa Kyusetsu X1.  My host was his son Kazuhiko Miwa, who had been introduced to me by my daughter who had met Kazuhiko, a potter, ceramic artist and architect, whilst on an arts residency in Hagi.  Miwa Kyusetsu X1 was a national living treasure so it was an extraordinary privilege to sit in the tea room and be presented with three Chawan for my inspection.   It was here that I discovered the beautiful snow like whiteness of shino with dark, blackened bare patches on the body of the clay.

Some time later, back in the , Alan Ault, the director of Valentines Clays, asked me to try some samples of a new coarse black clay.  The idea of having a black clay to use was both exciting and challenging and with some experiments, tweaks and adjustments I finally came up with an adjusted clay body that suited me.  I have used that clay ever since and my current body of work involves bringing together this coarse gritty, dark material with the beautiful qualities of thick unctuous porcelain slip.’