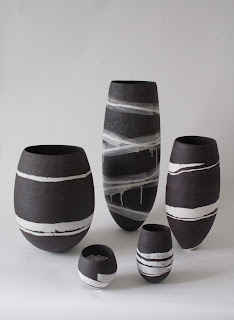 Gabriele Koch has established an international reputation for making, by hand, instantly recognisable forms: spheres, amphoras and bowls, burnished like old leather and given a special character by the decorative effects brought about by smoke in a sawdust kiln.  But she has recently come to a turning point in her career. After a quarter of a century of perfecting and controlling the ethereal patterns which come from the smoke, a new development is on its way.

Of course, smoke patterning on its own has no artistic merit if the form is boring or crass, or indeed absent. From that perspective, Gabriele Koch is on firm ground. The hand-built forms she has produced over the last decades stand up in any company. They are organic and sensual as well as being confident and precise. Her creative change of direction relates not to form but to integrated decoration.

Her new work, still at an early stage, is a marriage of high-fired coarse black clay with white porcelain sheets partially or vestigially wrapping the vessels, so that form and decoration have a dynamism where tone and texture are contrasted.

With the technical problems overcome, she now presents alongside her smoke-fired work a series of ceramics which put her work into a new and higher league. Rather than being calm and best appreciated in quiet contemplation, the new pots are forceful and graphic. Instead of placing the forms in the sawdust and relying to some degree on chance for the design, she is now in total control. Gabriele Koch has raised her game. 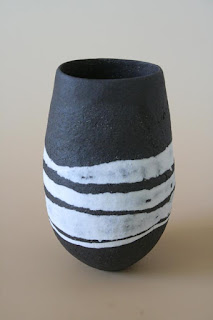 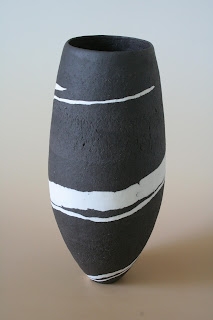 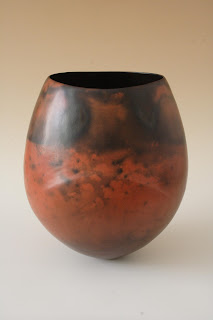