Made in Cley | A collective generosity of spirit and sharing 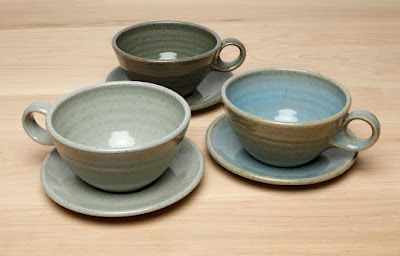 This time Contemporary Ceramics are featuring Made in Cley, not an individual but a collective of mostly ceramic makers (jewellery, graphic work and sculpture are also part of their repertoire). The four founder members: Wolfgang, Gunhild, Barbara and Quay met while studying abroad. Their work inspired by the likes of Bernard Leach, Michael Cardew, other leading studio potters and by Japanese and Korean ceramics.

Made in Cley was founded in 1984 in the small coastal village of Cley-next-the-Sea in Norfolk. They set up in an old village shop in Cley, a beautiful Regency building with all its original fittings and turned it into a gallery space and various workshops.

They have seen many members come and stay. The current collective are ten makers, nine of whom are ceramicists. They work alongside each other as a studio group sharing all aspects of pottery making and processing such as glazing, firing and selling. Functional wheel thrown pottery remains at the centre of their work. Due to the continuous exchange and cross influences, they decided not to sign their pots individually but to sell them under the name 'Made in Cley'.


We asked some of the members to introduce themselves. 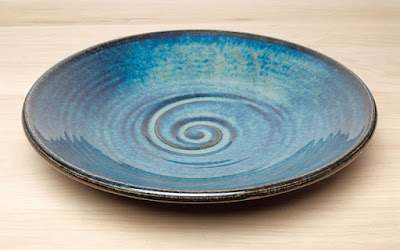 I am Gunhild Espelage, one of the founder members of Made in Cley, and came to be a potter by circumstance rather than design, and still to this day feel incredibly lucky about this turn in my life.

My love-affair with clay is ongoing, it is a material that is so rich and versatile and inexhaustible. It has not stopped teaching me new insights after so many years, and will no doubt continue to do so. I enjoy working with my hands, and I enjoy the feeling of being in a continuum of craft workers that stretches back to the beginnings of mankind.

In our 21st century we need a counter-balance to our increasingly virtual and IT dominated world, and this is where pottery and all creative fields where manual skills are celebrated, it is taking on a very important role. It reassures people that there exists another world beyond keyboards and screens and machines, a world that is shaped by human hands, that is tactile, and accessible and real, and where the human creative spirit can express itself in infinite and unlimited ways.

The most exciting aspect of pottery for me is the ability to shape, to pursue the perfectly balanced line for a bowl, or a lamp base, and then maybe to continue to explore further possibilities of these forms, or go away and try something completely different next time. Making pots has also opened my eyes to sculpture, modern sculpture in particular. 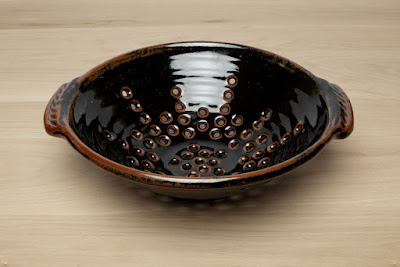 I am Barbara, one of the potters at Made in Cley. From school days onwards I have enjoyed looking at and making pottery. I always dreamed of having a pottery and gallery, this became reality when we started Made in Cley in 1984 in the Norfolk village of Cley next the Sea.

I'm Rosalind, one of the Made in Cley potters. I've been working as a potter for a very long time. The older I get the more fortunate I feel to be working in a group. However experienced you might be, you are always learning and in a group. Sharing ideas and skills can be exciting. I feel lucky to have an outlet for my creativity.

My name is Nicole and I am one of the potters living and working at 'Made in Cley'. After completing my apprenticeship as a potter in Germany in 2006, I was delighted to have had the opportunity to join this creative and diverse group of potters. I really appreciate sharing various tasks in the production of our pottery as a group and having the freedom to explore new shapes and forms at the wheel at the the same time. I particularly like making teapots because they are complex to make. It's a constant decision making process, which hopefully results in a pot that is full of life, functional and a pleasure to look at. 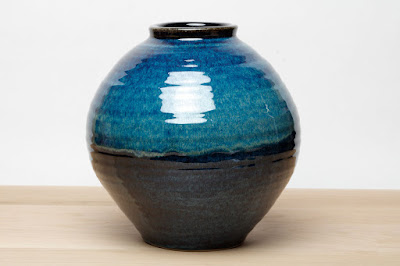 We have such a rich history and culture of making pots in the United Kingdom. I love that I can count myself as part of this and always find my inspiration from potters past and present. I have a photograph of Michael Cardew in my workshop looking so joyful sitting at his wheel - he always inspires me when I feel a little lost. A picture of a jug made by him and one by Bernard Leach remind me that I can do better, that there is still a long way to go. I enjoy visiting potters everywhere: to have the opportunity to see and feel their pots, to try and catch the spirit and energy of their pot making. We work alone at the wheel but need each other to make a pot come alive.

My name is Nadine Leech and I began throwing at Made in Cley just over 5 years ago. Before that I was working in the shop and assisting with kiln unpacking, pugging clay and whatever else was needed. I combined shop work and throwing for the next 5 years, but I am now pretty much a full time thrower. I am mostly self taught, but also I have been extremely lucky in having very experienced Made in Cley potters on hand to offer advice.

When I am in my work room I am alone, music on, no clocks. The rhythm of throwing takes over and I become immersed and focused. When trying out new forms I find that throwing 'sketches' on the wheel rather than on paper, quickly and efficiently tells me whether an idea has potential or not. 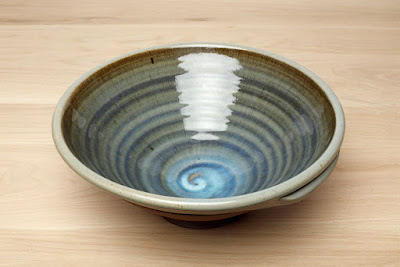 When I was very young, less than 5 years old, my mum had a friend who worked in a trendy boutique. We would call in about once a week and while they chatted I would stare at a big black and white Mary Quant daisy logo on the front of the counter, right at my eye level. Looking back, it seemed to fill my whole field of vision. I found it mouth watering! I looked forward to seeing it. Today, I am still drawn to the same quality that that logo has - a kind of austere friendliness. Pared down but not cold. Soft but not twee. Joyful but not loud. Along with a generosity of form and spirit, I hope to produce these qualities in my own work.

I think a potter's role in the 21st century is to make objects that please themselves and others. 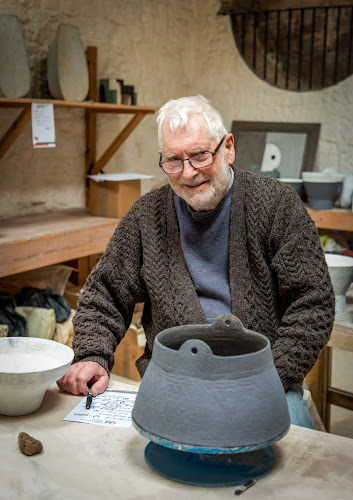