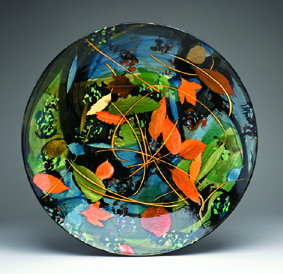 'It was in 1985 that I made my first tentative explorations into painting with coloured slips and it marked a turning point in my career as a potter. The discovery of colour and through it the potential for pattern and imagery was a revelation. Here at last was a visual language that I had long been searching for but which had somehow eluded me.

I come from an artistic family background. On my French mother’s side there are painters and sculptors going back five generations. My English grandfather, a writer, had close associations with the Bloomsbury Group and from an early age I think I must have developed some empathy with the vivid imagery and strong handling of colour associated with the Bloomsbury artists.

I went to Amersham College of Art in Buckinghamshire in 1974 and I chose to do ceramics because I was drawn to the qualities of clay and its ability to be transformed from inert mass to wondrous object. I focused on throwing because of its immediacy and also I enjoyed the processes involved in making functional objects: throwing, turning, handles, spouts, lids. It was the work of Elizabeth Fritsch and Alison Britton that first awakened me to the possibilities of colour and a seed was planted in my creative subconscious, but it would be some years before that seed would bear fruit.

Arriving in London in 1977 fresh and green from the country I was suddenly plunged into gritty, urban, East End life. I joined ‘Workshop’ - a converted Victorian coach house near Victoria Park in Hackney owned by potter Caroline Bousfield and here I made both earthenware and stoneware domestic pots and sold directly to the public. This had its rewards, but after three years I felt my work was going nowhere and in 1981 I thought I might be a sculptor (ancestral voices calling?) and went to Wimbledon School of Art to find out. As it turned out, I wasn’t and I did wonder what I would do next.

In October 1984, an opportunity came my way to go and work as assistant to the textile designer turned ceramicist John Hinchcliffe. At the time he was making press moulded plates and dishes and then decorating them with bold flower designs by painting oxides over paper stencils on white tin glaze. He also used a sponging technique to great effect. It was this aspect of his work that opened my eyes to the possibility of decoration and colour. It struck a resonant chord within me and I realised that this had been the missing element in my own work.

Elements of the Bloomsbury and Omega style, which I had been conscious of since childhood, found their way into my ceramics but it was also the work of painters such as Matisse and Chaghall, with their joyful approach to colour and subject matter, that I looked to for inspiration. The drawings of Picasso and Ingres also informed the figurative content in my work. Liquid wax became an important medium for me through which I could develop a personal alphabet of calligraphic marks, thereby opening up a repertoire of forms and patterns.

In 1992 during a residency at Charleston Farmhouse in Sussex, I found myself responding instinctively to the landscape around me. This produced a shift in my work away from pattern towards abstraction.

In recent years I have been exploring the theme of 'nature meets urban' and I have found my gaze turning increasingly towards the ground. Each changing season has its ‘wow’ factor but every year I am bowled over by the beauty of autumn and the way that the leaves scatter and flow whether it is over pavements, on a tarmac road surface or around a curb-side storm drain. I also love vibrantly coloured leaves that stew in puddles with the sky reflected in the water. Trying to capture and convey these sorts of things in my work involves the use of a great many leaf stencils which are copies of real leaves. The composition is then built up gradually, leaf by leaf, stalk by stalk over layers of painted coloured slips and touches of wax resist. This is a very time consuming process particularly with the largest pieces and yet the effect I am striving for is as though a gust of wind had just blown the leaves across the surface of the bowl or plate.

Lately I have been experimenting with roughly cut or torn newspaper in an attempt to free up form. It will be interesting to see where that goes.'